I will admit it.   When it comes to all things related to the world wide web, its complexities are lost on me most of the time.   I have a rudimentary understanding and some fantastic support people, but the world of the web scares me while at the same time fascinates me.   I want to support my business best, myself at times and if you know how to work it, the WWW promises both.  You can obtain information about everything from the grotesque to the beautiful, from the benign to the malignant, from the sane to the psychopathic.  For something that is just coding and numbers it is pretty downright amazing. 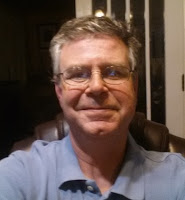 All I wanted to do was link a blog to a website. After about 8 hours and a whole mess of heading down the wrong paths I did it.  I have built it, but will they come.

This one is an experiment to see if I can make something work on a website that, if I have to shut it off, would not affect my business in any way.  Do this to diversinc.com or Whitestarquarry.com and it could have everlasting effects on the way things work for me. Lets just say that while I know what I know, I am painfully aware of what I don't know. The amazing part is the community of friends that I have who would be willing to help me out should I completely put myself on the beach so to speak.

While I have been doing the whole scuba business thing for about 30 years it is not as simple as it once was.  As far as the diving industry is concerned I am way ahead of the curve.  As far as the potential something like this has, the stress of making a blog with real content is as daunting as my first podcast.

We shall see how it goes.
Posted by RichSynowiec at 1:00 PM No comments:

Migration of Posts - Adding some of the older stuff to this blog.

It seems that I have a lot more to talk about than just scuba diving.   I do have a bunch of really cool posts in my divers incorporated blog and a few appear in both.  This blog is primarily for my own benefit since I do, from time to time want to have a conversation with my future self.  What you will see if you are keeping score is a couple of  "new" posts that were from a few years ago.  Bear with me and I will get back on track.   The reason for the migration, in case you are curious, is that I recently went to the PADI Business Academy and there it was suggested that we incorporated a blog into our web pages, since I will be doing that shortly I figured I should sort out the diving from the personal.

Thanks for reading, its great to have you along for the ride.
Posted by RichSynowiec at 9:20 AM No comments:

Originally Published on November 12, 2014 on the Divers Incorporated Blog - moved here for your amusement.

This isn't so much about diving as it is about a cool outing from my past.   You see, for their 9th birthday my twins wanted something cool. In trade for a birthday party they wanted to get their passports and then take a trip to Canada.   This wasn't at all unreasonable and it would cost the same so Jill and I decided to go for it.  As it turns out the problem would be finding a free day to take them.

Today was that day.

We got up early and headed out with a plan A and a plan B.  The first goal was for the girls to see the USA from the Canadian side.  The second goal was to see Fort Malden.  The British Fort that launched the Battle of Lake Erie.   I had a goal to take the girls to see a relic of my childhood, I was just not sure if it could be done without a boat.   I was happy to say that it was both easier and better than expected.

The main goal for me was to see Boblo Island. An amusement park that my parents took us when I was little.   I vaguely remember the first time that I was there but I really remember the year that I was finally 48 inches tall.  That was the magical height where you could ride both the little kids rides and most of the adult rides.   The girls were both about that age and height.

Our adventure started when we crossed the Ambassador Bridge over to Canada.  The Jill, the girls and I all answered all the questions of the customs officer on the Canadian side and he was able to actually stamp their passports!  We got over to Canada and to my dismay google maps didn't work over there (I had set it up so I thought that it would) so I had to use "the Force" to find my way around.  Good thing that there were excellent signs to Amherstburg, Canada our ultimate destination for this go-around.  We stopped briefly in La Salle, Ontario, Canada so the girls could get their first glimpse of Grosse Ile, the island that I grew up on and that they had visted often, as recently as yesterday.  We were able to see some recognizable landmarks including the chapel that Jill and I got married in.   They had fun in a park nearby playing on a "Canadian" Play set.  The gravel underneath was the most noticeable contrast to the American, over-pasteurized play sets. 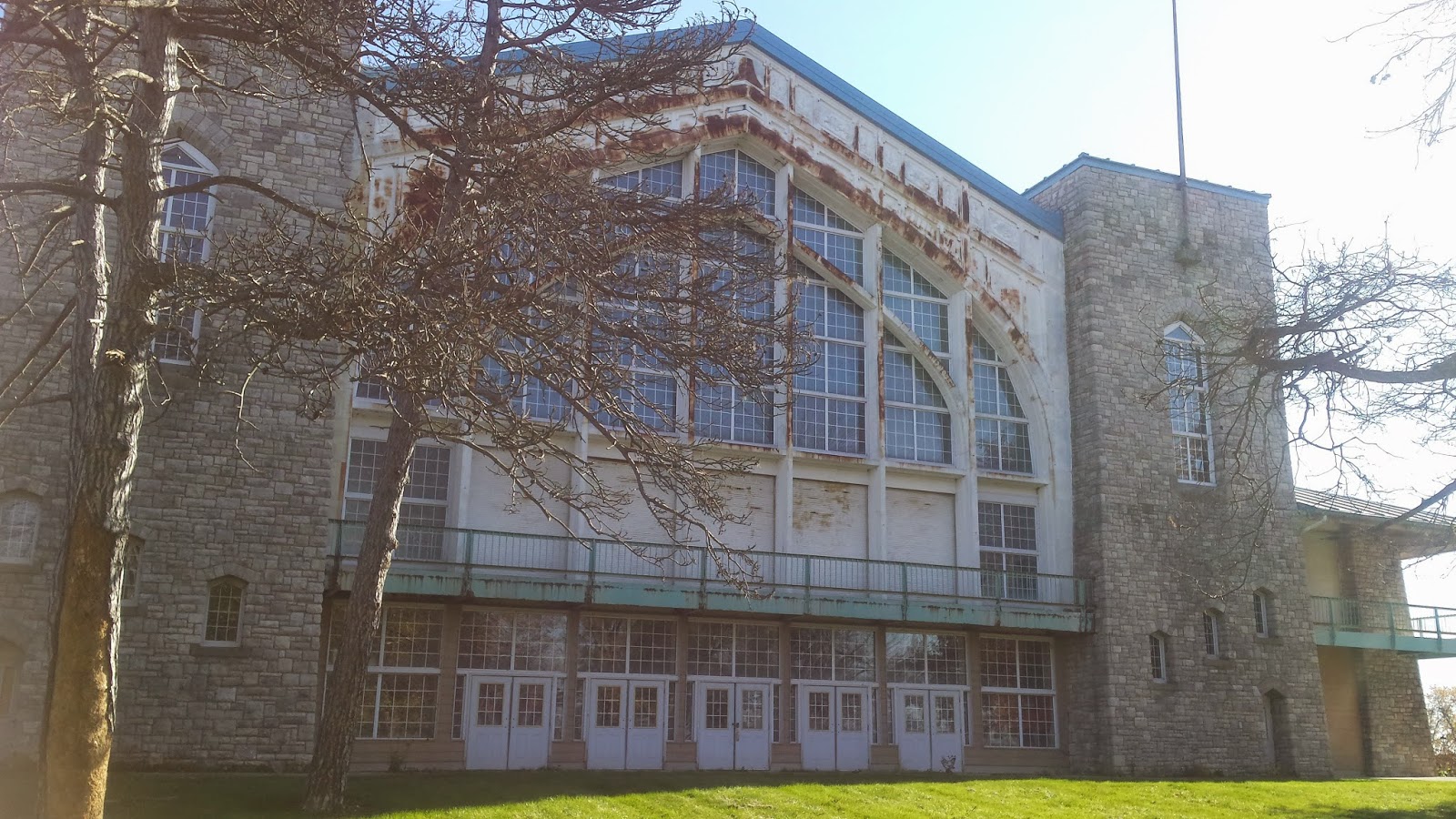 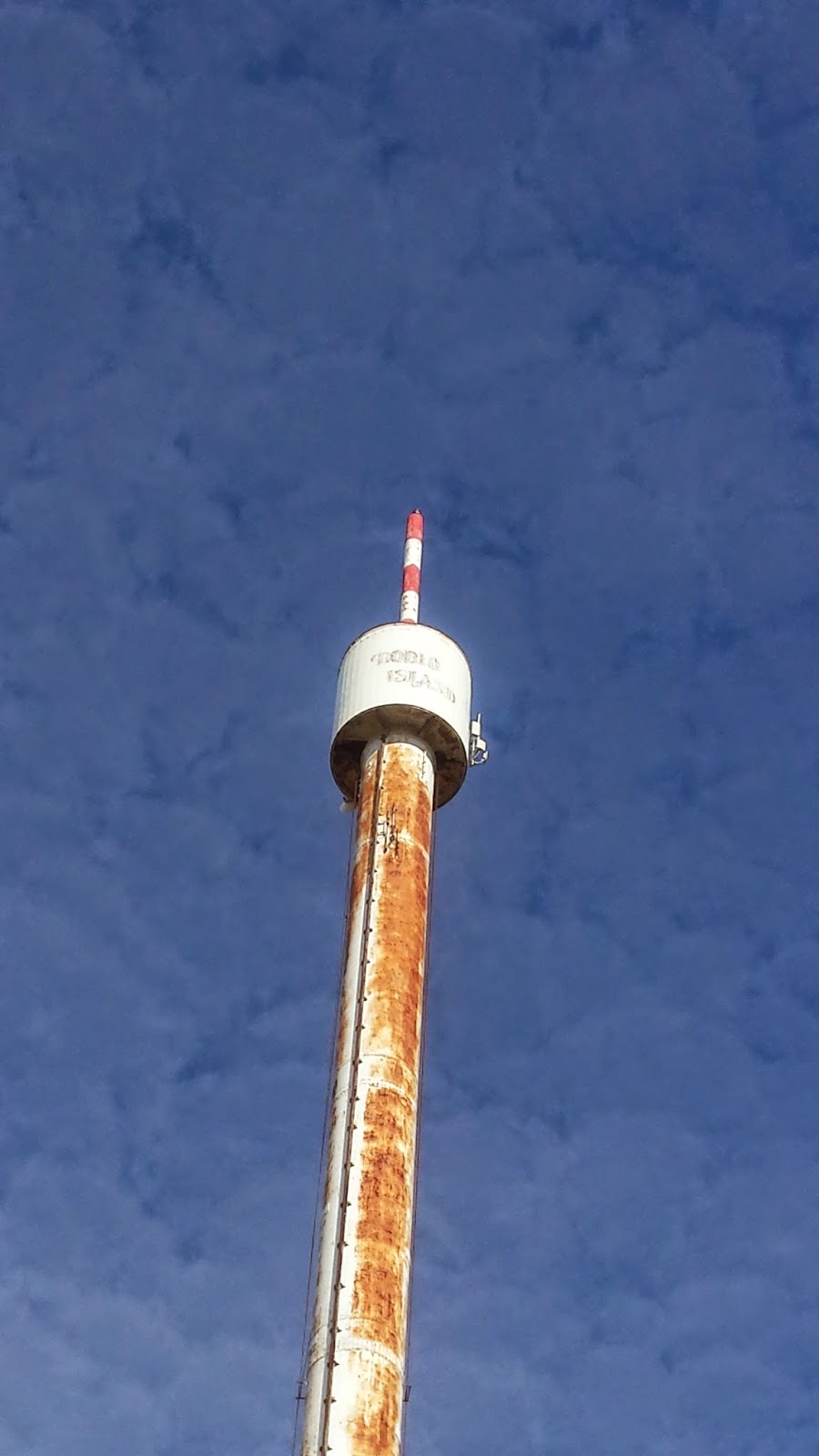 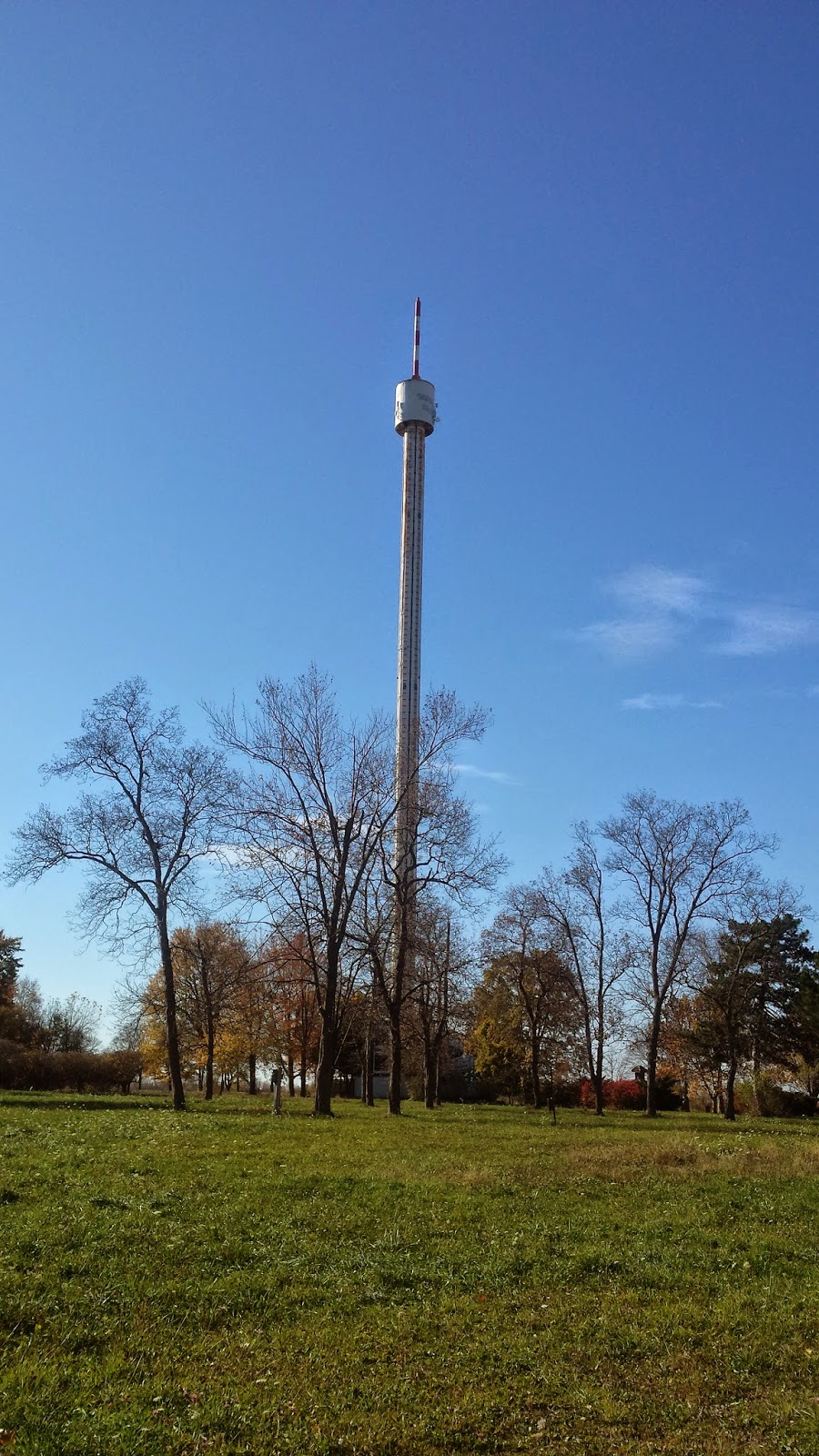 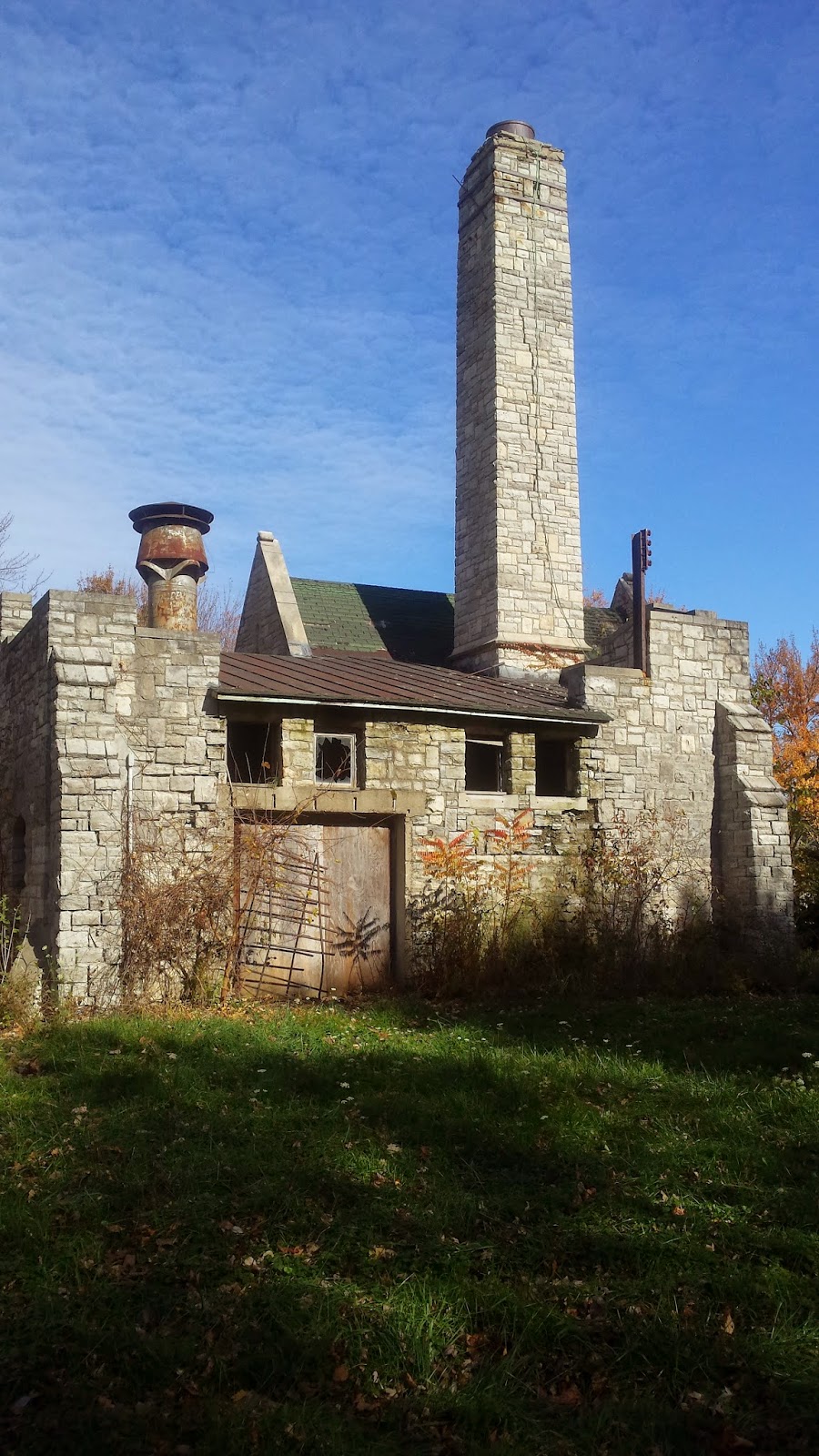 Traveling down the road a bit more we came to Amherstburg.  This little town was pretty cool... there was a park overlooking the "hole-in-the-wall" and the entrance to Crystal Bay. All Relics from my childhood and adolescence.  In Amherstburg we hit the first bump.  I was hoping that the rumors of the closing of a favorite restaurant from the past were untrue since there were billboards advertising it on the way in. It was unfortunately all closed up.  BUT!  The ferry to Boblo was just past it and it was a whole lot easier than I expected it to be.   We drove up just as the ferry was making its landing.   I got out of the car and went and talked to the Captain as he was stepping off the Ferry.  It seems that for $20 you can take your car across the river and drive through the neighborhood once.  Then you could park the car and walk around the remnants of the amusement park at your leisure.  There were some rules to follow and the weather was cooperative  so it turned out to be an amazingly awesome experience. The only thing that I wish I would have done was to research it a little more ahead of time.  There was a lot more there than I had anticipated.   I relied on a 40 year old set of memories of a time that was long past.  But the girls were thrilled and this was all about them after all. If you are one of the thousands of people who have visited Boblo in your childhood I highly recommend the visit.  I think that next time I am going to do things differently.  It seems that if you want to do a major photoshoot there you just have to pay a licensing fee of $100 and you can use your big camera. Since I didn't want to push it too much, not knowing what was there, I just walked around and shot pictures with my phone. 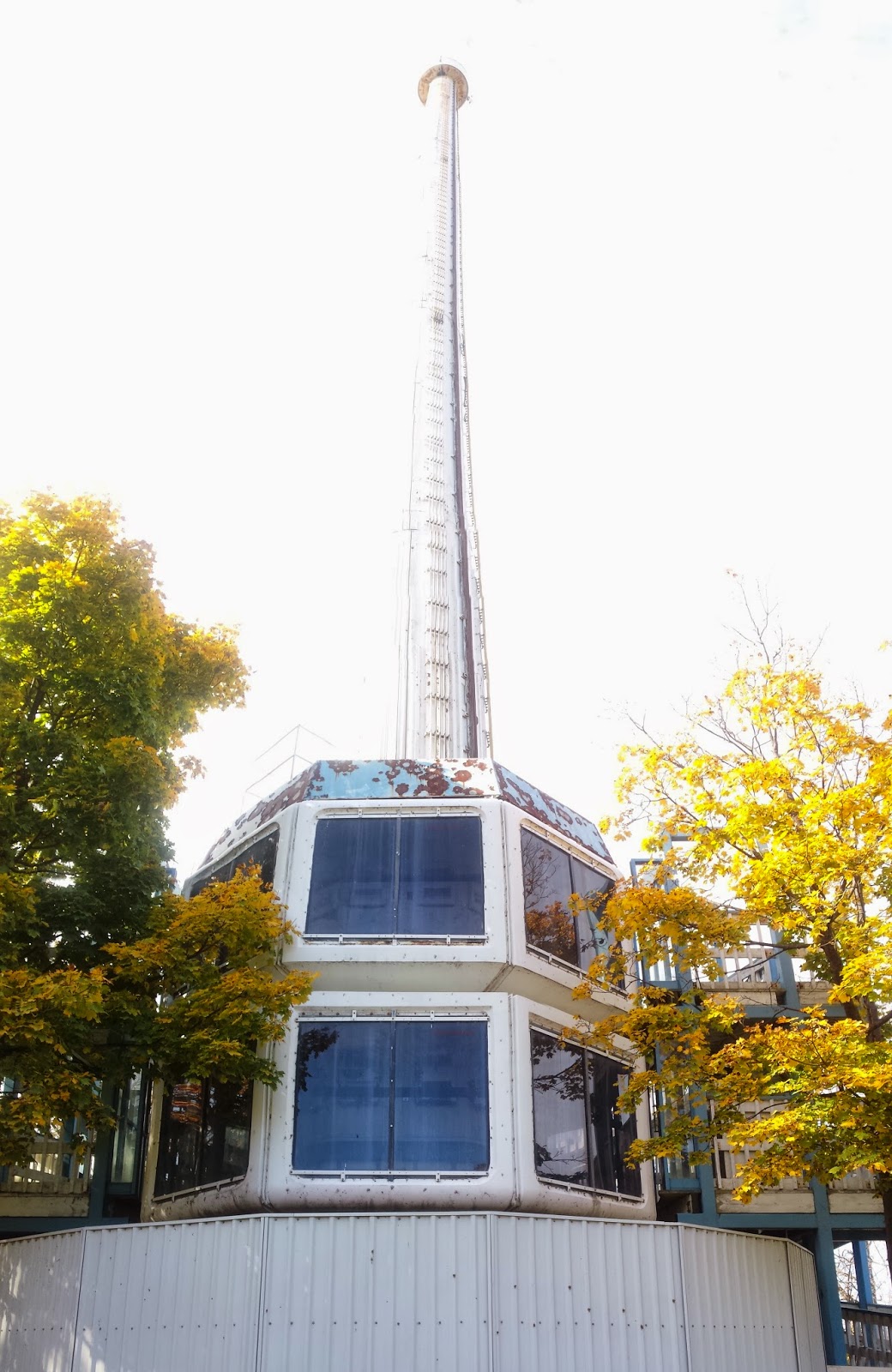 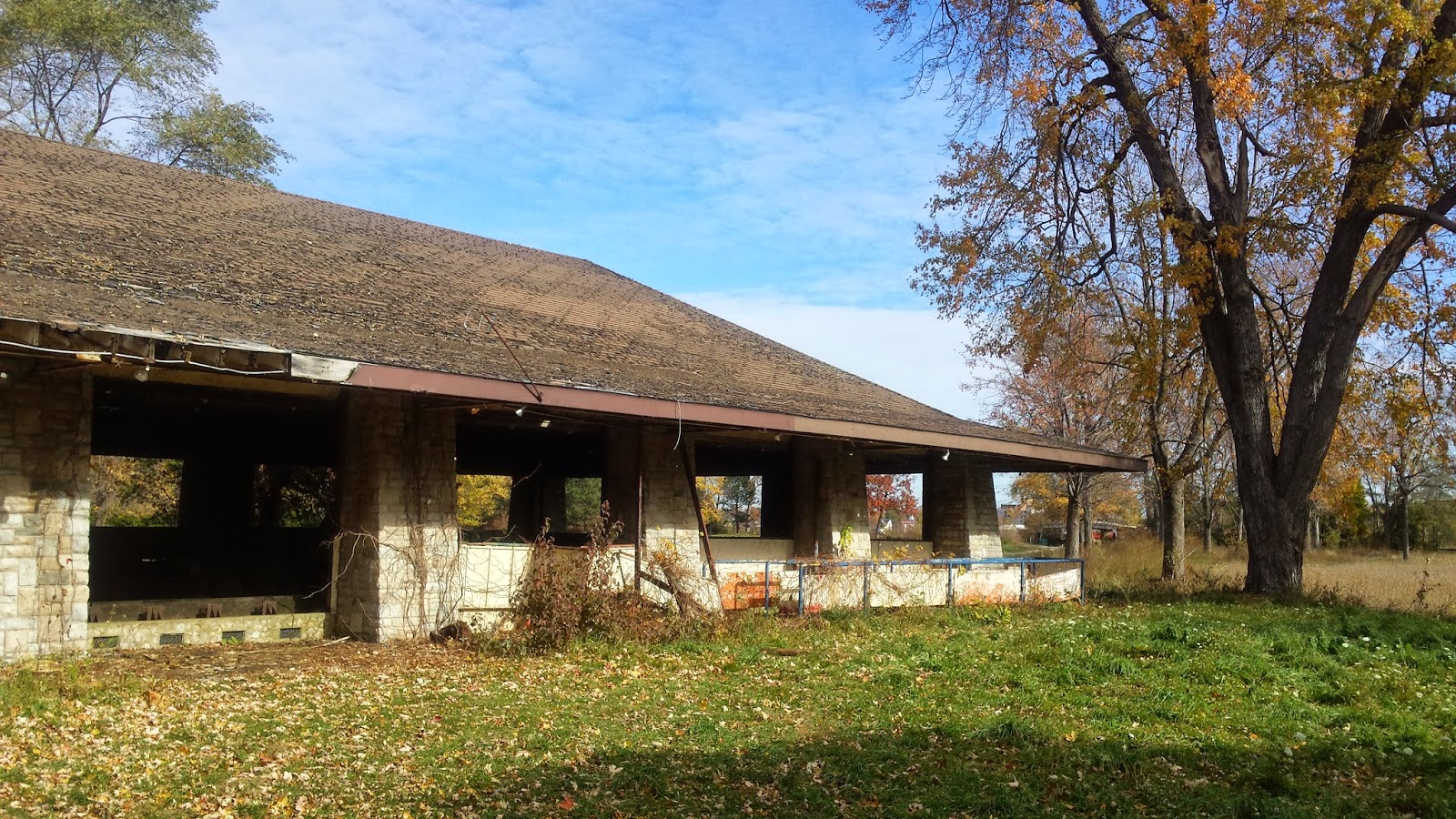 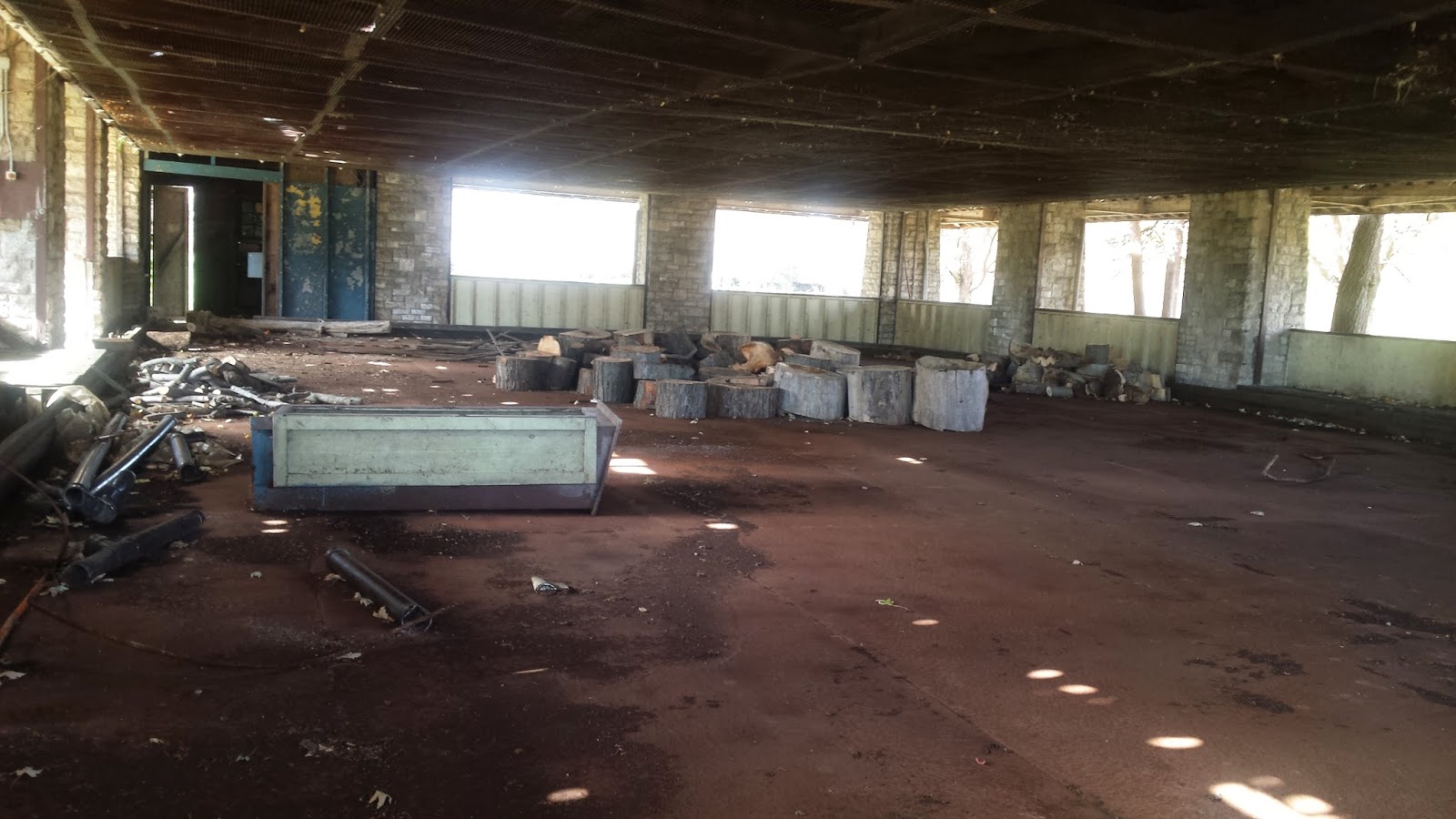 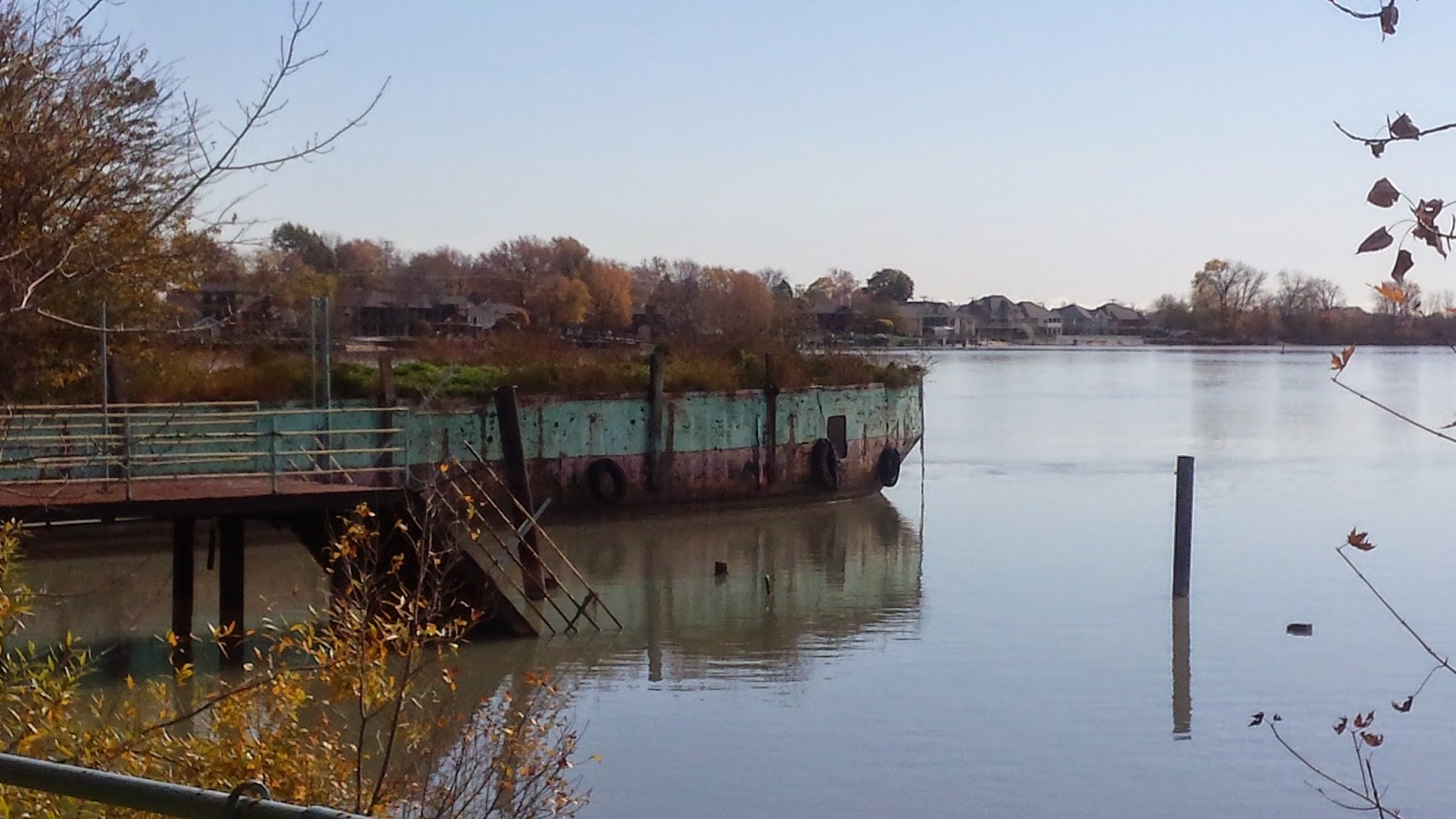 After an amazing couple of hours, and leaving some things for next time, we went for lunch in Amherstburg.   This little town had a couple of taverns and restaurants and are right in the open and at the same time difficult to find.  There isn't much in the way of parking so we parked and walked and found a delightful place called the Artesian Grill.  Great food and the first change that Natalie and Oliva noticed in food. Sometimes Shirley temples are made differently and they were totally happy with the choice.   They had been shown some of the differences, washrooms instead of restrooms, neighbours and other words spelled differently, the money differences and the KM/H on the speed limit signs but this one directly affected them.  The best fries and amazing food.  With Full bellies we headed for Forth Malden.  Only to find that it was closed for the winter.  Bummer.  We headed out on a different mission.  After filling the trunk of Jills car with Canadian Beer and Cider we zig-zagged through Windsor looking for a playground.  The girls wanted one more run around a playset.   No luck finding one though. Jill suggested Belle Isle and the day got a lot better.


We crossed back to the USA through  the tunnel clearing customs was fun with lots of questions for the girls after I told the customs officer that this was their birthday present.   He didn't have his stamp for their passports but he let us through without problems.

Off to Belle Isle. 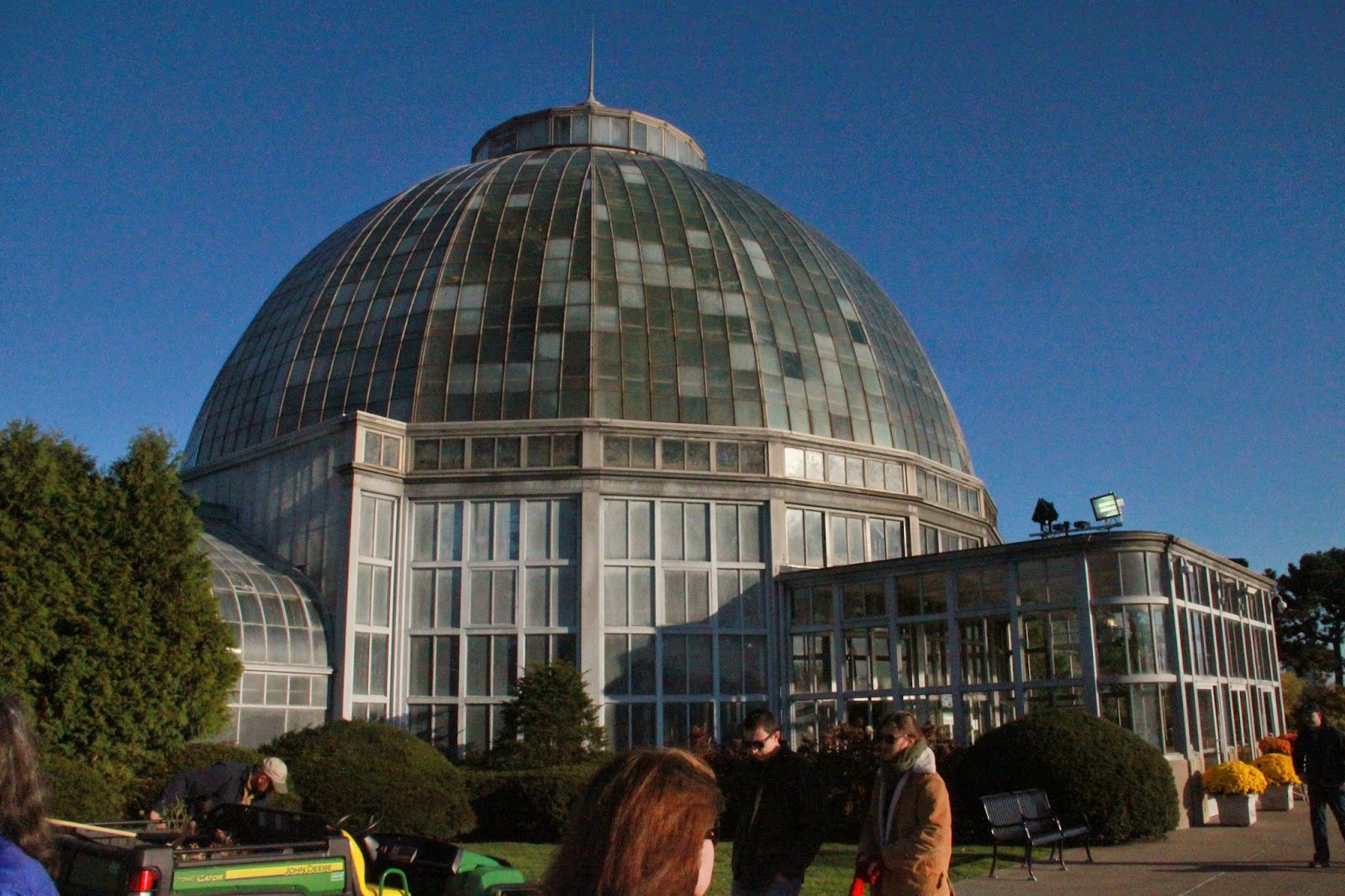 This was pretty cool since the girls had never been there.  They saw the fountain and a good view of the Ren Cen then they had to use the bathroom so we went to the Casino to take care of that.   Then to the Aquarium to find IT WAS OPEN!!! YAAYYYY!!! 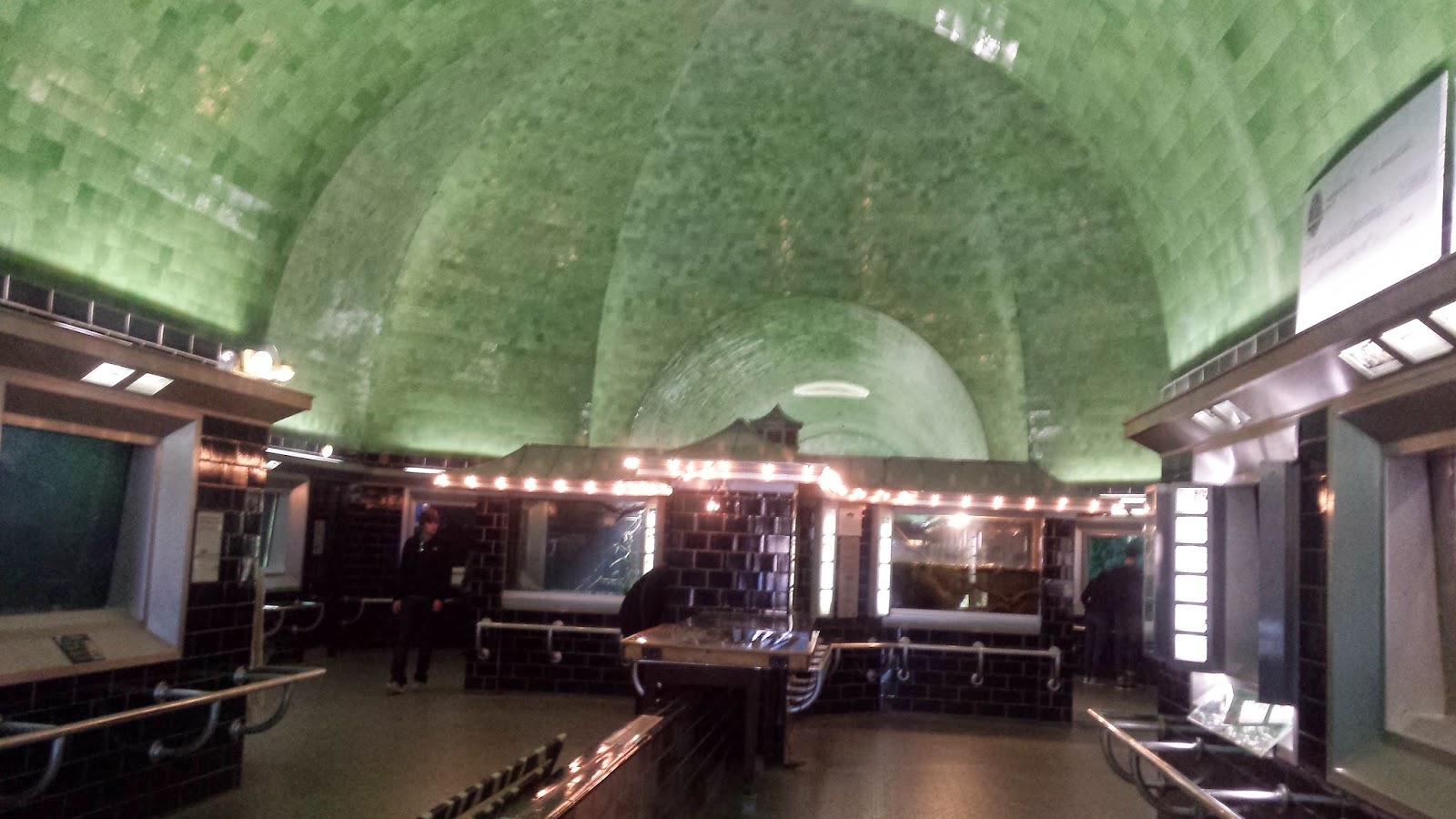 I had not been in the Aquarium in some time.  The Belle Isle Aquarium is one of the oldest Aquariums still in operation in the USA. When it closed in 2009 the aquarium was the longest continuously open aquarium at 104 years.   It is almost the same as it was during my childhood.  There is a lot of work that needs to be done but this is a pretty amazing time capsule.  This was super fun.  Afterwards we did a tour of the nearby conservatory  and got our dose of warm tropical air.  Te twins ran in the garden afterwards and then we headed home.   On the way was the hands, down most amazing outdoor playset that I have ever seen.  The girls got their final birthday wish.

Amazing day for a set of amazing kids.  Cannot wait to do it again!!!

Posted by RichSynowiec at 6:37 AM No comments: